This is Us second annual conference

This is Us is hosting its second annual, and largest diversity conference in Milton Keynes

This Is Us is designed to advance LGBTQ+ diversity and inclusion within the workplace. Organised by Meena Chander, Owner of Events Together, This Is Us is working with businesses to address LGBT bias in the workplace, and create real time solutions and better practice.

Use the code IEDP5 for 5% the ticket price 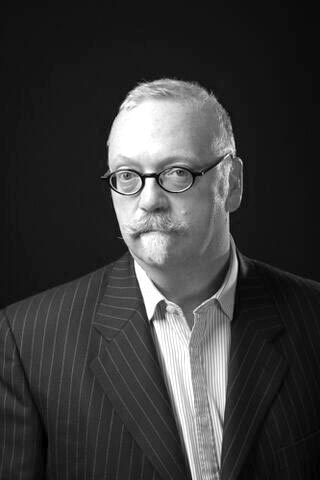 Please join us in celebrating Roland Chesters, an IEDP Advisory Friend as he was recently shortlisted for the  Positive Role Model Award for Disability at the UK’s largest diversity awards, the 2019 National Diversity Awards! Such an amazing achievement to have been shortlisted.

See our review of trans equality books and other resources

The latest IEDP newsletter (May 2019) has recommendations of a lot of useful books and resources on trans equality. Click here to find it.

Staff Networks - help or hindrance? How to continue establishing and cultivating engagement through staff networks

The event, entitled Raise the Bar, will be held in central London on Wednesday 14 November starting at 6 pm. For further details and to book for this evening of discussion and networking go to the Eventbrite page.

Be a part of the purple revolution!

3 December is International Day of Persons with Disabilities. First launched by the United Nations in 1992, it’s now a globally recognised date that brings together a united voice to celebrate and empower disabled people. On this day the world will light up in a simple, powerful declaration of solidarity amongst, and with, disabled people.

Networks, resource groups, allies, champions and supporters are coming together to celebrate the economic power of disabled people across the globe.

Join in and grow this transformative movement. #PurpleLightUp

If you would like to be part of #PurpleLightUp powered by PurpleSpace, or want to learn more about PurpleSpace, we would be thrilled to hear from you.
Kate Nash OBE, Creator & CEO: This email address is being protected from spambots. You need JavaScript enabled to view it.

7 days to our summer seminar! 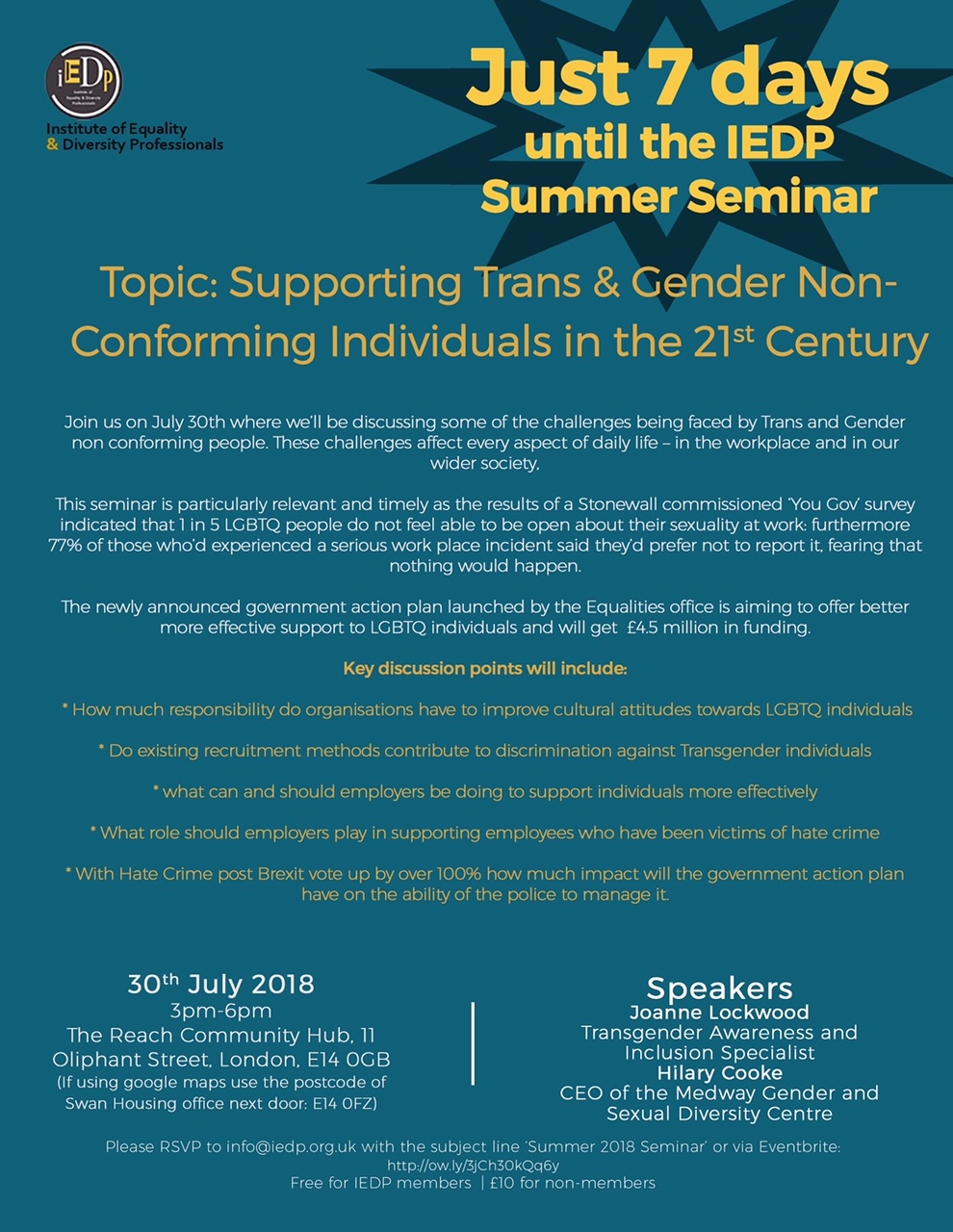 Our summer seminar is on 30 July.

The long awaited consultation on the Gender Recognition Act is now open.

The consultation closes on 19 October 2018. You can take part as an individual or an organisation. If you want to be part of the IEDP's response come to our Summer Seminar on 30 July and have your say:  Here is the link to submit a response

Reduction in cost of IEDP membership

Substantial reduction in the cost of IEDP membership!

The review finds that the UK legal system is failing women and is in need of reform.  Read the review here.

Little Rebels is a relative newcomer on the children’s book award scene. Now in its sixth year, the award was conceived by the Alliance of Radical Booksellers and established in conjunction with Letterbox Library. The prize celebrates the best in children’s books, for ages birth through to 12, which tackle, explore and celebrate ideas of social justice through well-crafted stories and exceptional artwork.

Little Rebels is currently run by Letterbox Library in partnership with Housmans Bookshop. Both Letterbox Library and Housmans Bookshop have long histories of unearthing, foregrounding and celebrating literature about social justice. Letterbox Library is a 33-year-old mail order children’s booksellers specialising in bringing inclusive and anti-discriminatory books to schools and nurseries. Housmans is the longest surviving and one of the last remaining radical bookshops, with a growing and exciting children’s book section. Their respective specialisms in equalities and radical thought make them the natural choices for creating a new canon of social justice children’s fiction through the vehicle of this award.

In the world of children’s literature, social justice can of course take many guises. Previous submissions to Little Rebels have introduced an exploding teddy bear, a boy who likes to knit rainbow-coloured scarves, a child who is ostracised for-quite literally- defying gravity and a field of worms who join a union and go on strike. Previous winners of the award have embraced feminist insurrections, young people navigating the care system and… a little finch who ponders on weighty existentialist concepts! Interestingly, two of the five winners have been refugee narratives, reflecting the recent concerns of some children’s  authors to give children stories to counter some of the hateful anti-refugee rhetoric so prevalent in our wider popular culture.

By highlighting and amplifying the existence of social justice books, the Little Rebels Award becomes so much more than simply an accolade of good quality children’s literature. The award expands the appreciation of children's literature out of the next best seller or sparkly book series. It takes quiet and patient stock of the books which nudge and provoke, which gently encourage children to notice the world around them, to ask questions and, where necessary, to challenge the status quo. If our children are witness to the world then they are witness to social injustices. The stories we give them can empower them to make sense of such things and they can also enable them, if they choose, to join us adults when we say, 'this has to change'.

This is what the Little Rebels Award embraces; simply put, it celebrates children's compassion and keeps their hunger for asking 'why?' alive and well.

For full details of the award, click on The Little Rebels Award for Radical Fiction. And do sign up for updates! You can also follow the progress of the award on Twitter at @littlerebsprize. The shortlist will be announced in May and the winner will be announced at the annual London Radical Bookfair on 2 June.

The topic for the session will be discrimination issues in housing law: recent cases. The speaker is Liz Davies and the event will take place on Wed 29 Nov at 6.00 pm at Slater Gordon, 50 -52 Chancery Lane, London WC2A 1HL.  Click here for Liz's biographical details

Our Autumn Seminar will be on 30 October 2017 in Birmingham

Equaliteach is putting on a free training session on Universal Values: promoting Fundamental British Values cohesively in the Early Years. This will take place in Rotherham on Thursday 27 April. For more information and to book a place click here.

Next meeting of the DLA Practitioner Group is Wednesday 29 March

No need to book, just come along at 6.00 pm to Leigh Day, Priory House, 25 St John's Lane, London EC1M 4 LB. The speakers will be Tom Linden and Annie Powell and the topic will be recent cases on employment status. Click here for a map

Consultation on housing and support for disabled people

The EHRC is conducting a formal inquiry into the chronic lack of accessible and adaptable housing available for disabled people in Britain. They are now calling for evidence and want disabled people and relevant organisations to share their experiences of housing and tenancy support provision with them. They will publish their findings and recommendations early in 2018.  [Click here for further details]

Book here for our spring seminar on hate crime

Centre for Inclusion and Diversity, University of Bradford

Diversity Challenge Seminar: How can we develop culturally competent services?

Diversity Challenge Seminar: How can we develop culturally competent services?

This seminar will be held on Thursday 2 March from 10.30 to 12.45 in Room E92, Richmond Building, University of Bradford.

The concept of cultural competence in health and social care services was developed as a response to the inequalities and disadvantage experienced by people from minority ethnic and religious communities. Such communities represent a significant part of the British Population; the last UK Census showed that minority ethnic groups made up 14% of the general population of England, with higher rates of up to 40% in some cities.

Barriers to effective service provision for minority ethnic and religious groups include: poor knowledge of available services, poor standards of communication, delays in diagnosis and treatment, high levels of stress among carers, and significant unmet needs.

Led by Ghazala Mir, Associate Professor, University of Leeds,this presentation will describe potential solutions to such barriers and methods that practitioners can use to develop culturally competent services.

To book your place go to:  http://estore.bradford.ac.uk/product-catalogue/centre-for-inclusion-and-diversity/conferences/free-conferences/diversity-challenge-seminar-how-can-we-develop-culturally-competent-services

Season's greetings from the IEDP

The theme this year is 'Seeking Courage, Fighting Hate and Finding Belonging in times of Global Instability.' To book your free place click here.

Be yourself - Bi awareness

Event on Thursday 10 November in London

The LGBT organisation Stonewall is currently advertising a number of vacancies with a variety of closing dates in September: Click here for information

We're not so different

Oxfam Education have produced these free teaching resources including a short film. These are part of their 'Stand as One' campaign - asking people to stand in solidarity with people who are forced to flee: Click here for more information

Report on sexual harassment and sexual violence in schools

On 13 September the Women and Equalities Committee of the House of Commons published a new report entitled Sexual harassment and sexual violence in schools: Click here to read the report

Anyone interested in the position of senior E&D advisor at Warwickshire County council? The closing date is 14th August and interviews will take place on Friday 19th August.

The Department of Work and Pensions is currently asking for feedback on how the Personal Independence Payment (PIP) assessment is working. Consultation closes 16 September 2016.

The EHRC has issued a letter to employers about the increase in rate hate actions since the EU referendum.

Facts and figures on equality and diversity at SDH

This article about Salisbury District Hospital features their head of equality and diversity Pamela Permalloo-Bass.

Trevor Phillips on Race, What Muslims Think and getting support from the Far Right

Jack Somers interviews Trevor Phillips about his new essay, 'Race and Faith: the deafening silence', and the two recent controversial Channel 4 programmes he made.

The newly elected Mayor of London has suggested that Ramadan provides an opportunity to reduce people's suspicions of Islam.

Being Muslim in a country where not everyone is fasting can be difficult. This article by Jess Stautenberg describes how non-Muslims can be supportive.

Only one week to go to nominate for National Diversity Awards!

There is only a week left to nominate people or organisations for this year's National Diversity Awards.

Read how to do this here:  https://nominate.nationaldiversityawards.co.uk/

Julian Bond: Reflections from the Frontlines of the Civil Rights Movement

BBC says it will question recruits on family background

As part of its 'new approach to diversity', the BBC is going to monitor applicants for jobs by asking questions to elicit information about their socio-economic background.

New figures show that workers at the DWP took more than 112,000 days of sick last year because of mental health problems.

This article, based on research by an organisation that represents mental health trusts, reports that the government is not meeting its goal of mental health having 'parity of esteem' with physical health.

Interesting article from October 2015 based on the CIPD's absence management survey.

The Equality and Human Rights Commission are taking the view that the Health Secretary's proposed new contract for junior doctors is potentially discriminatory.

An inquiry by the Equality and Human Rights Commission reveals more than 60% of FTSE 350 and 45% of FTSE 100 companies are failing to hit diversity targets.

When Facebook hired Maxine Williams as its global director of diversity in 2013, the social media giant was approaching its tenth birthday.